Every now and then (ie. often) a page will give me fits.  As often as not, it's not even anything you'd think would cause a problem- a facial expression- a tilt of the head or hand.  This is just such a page.

Beginning with the thumbs I thought it was going to be easy-peasy, and if I was worth a damn at this doodlin' business it might have been.  My first clue that it was going to be trouble should've been, and often is, when I can't get the scale of the figures right.  See, the guy at bottom left.  He's supposed to be in the panel above him, not at the bottom.  I just couldn't put him where I wanted.  Brain fart.  Crossed wires.  I don't know.  Things weren't flowing.

For the record, the bird doodle on the left margin of the thumbs is way better than the final on the page.  See how i torture myself? 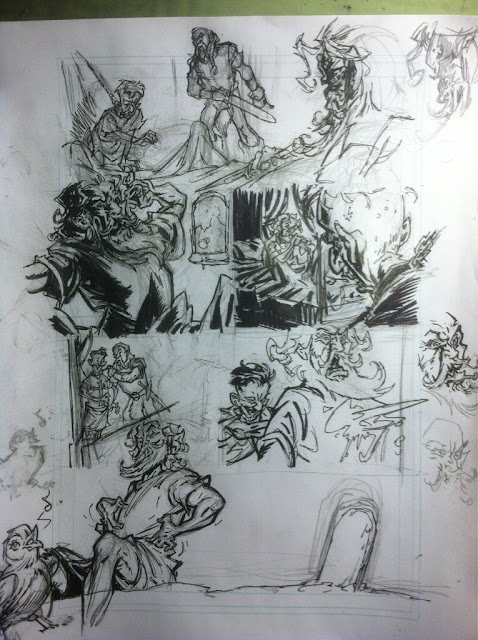 I didn't take any photos of the doodling I hated.  I mean, why would I?  Do you go around showing of pictures or your thinrd nipple?  well, maybe you should.  There could be some coin in it, for you.

Enough about your pain and suffering and back to mine.  After much erasing and swearing and self-pitying tweets and facebook posts, I took to my sketchbook.  I don't do much drawing in my sketchbook.  I should.  I'd be a much better artist if I made the time.  It's, mostly, a place for working out problems.

The problems on this page, were the first two panels.  I could not for the life of me get them down in a way that pleased me.  my first attempts at panel one looked like a hieroglyph- flat, boring lifeless.  To the sketchbook... 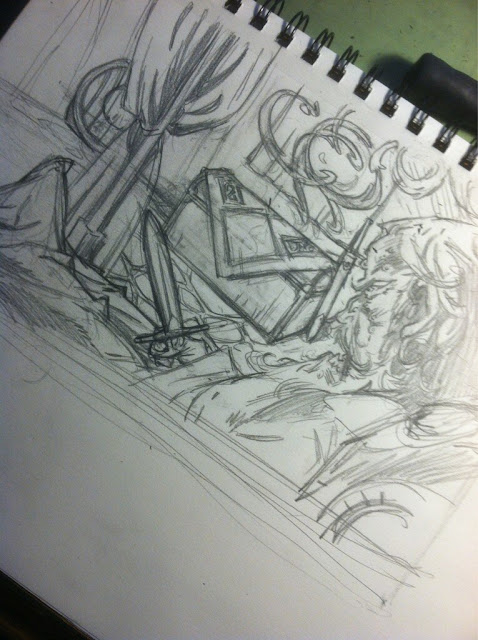 The second panel was a problem of body language and facial expression.  I kind of like what I had in the thumb, but it wasn't making the leap to the page.  So, again, to the sketchbook... 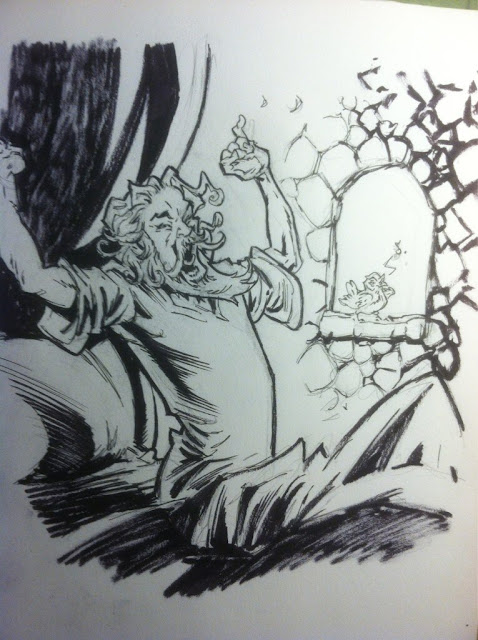 So, what I do with these images once I have them how I want them is, I Make copies on my printer, resizing them as needed, and lightbox them onto the page.  The same goes for the thumbnails.  In theory, it saves time.  After all me redrawing, I need what help I can get. 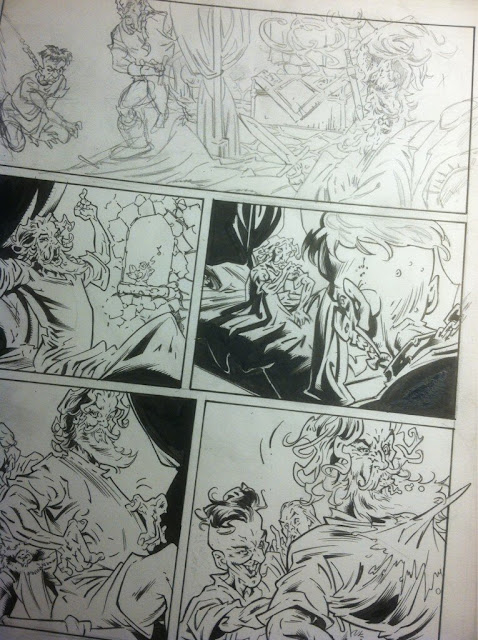 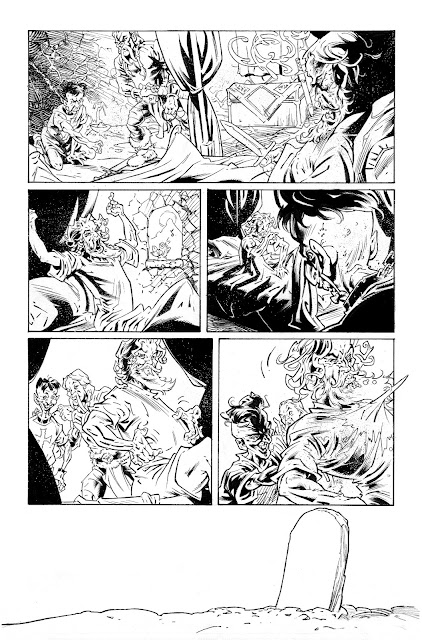 So, there's the final page.  Still a bit of a ham-fisted mess.  The rendering behind the figures at top left of the first panel is a mess.  When I'm struggling I tend to over-render.  I do like the guy in the bed.  He was the bit with which I struggled most.  He's now my favorite part of the page.  Go figure.  Some of the rest of the page suffers from tense inking.  Don't ask me what that means.  It's part of the cartooning disease.

You're right if after reading all this you're thinking this post is pretty pointless.  But then, what about this page isn't.  I just took the gamble that someone who's into pointless things might like to see the step x step of my pointless doodles.  It's, also, an opportunity to extoll the virtues of the sketchbook- a lesson I should learn.  Sometimes it's great to just change the view of the field.  If the page becomes a problem, get away from it.  Grab your old pal the sketchbook.  The fresh page, without the sense of finality, is a wonder.
Posted by John Lucas at 12:06 PM