I think I might have mentioned I picked up an inking gig.  I'm working on a five issue arc of Ultimate X-Men, starting with #29.

There's a lot to like about inking.  It's much faster than pencilling.  It's, frankly, much easier.  The pay isn't as good as pencilling, but because of the previously stated reasons, I can ink more in a day than pencil.  So, it more than works out.  I'm inking an X-book.  So, there are residuals.  Free money is always a good thing.  It being an X-book, also, increases chances of selling originals.

Aside from the monetary and laziness advantages I get to play around with other styles/techniques I wouldn't normally use.  So, it can be a learning experience- something I can take back to my own work.  Going back to the issue of speed, once I finish my ink work, I can work on drawing.  It's a win/win.  That's the idea, anyway.

There's been a bit of juggling.  In order to get a good groove going with my inks- it always takes a bit before I'm able to find the happy zone when inking a new artist-, I was neglecting my drawing.

Now, I don't know about you, but my drawing muscles atrophy, practically, overnight.  Once I got back to drawing, I felt as though my drawing hand had been replaced with a monkey paw.  I have no idea what animal part had replaced the part of my brain used for drawing.  Layouts were a pathetic struggle.  I scrapped half of the first page layouts AFTER drawing most of it.  I redrew the first page I worked on three or more times.  Not exactly the best use of time. 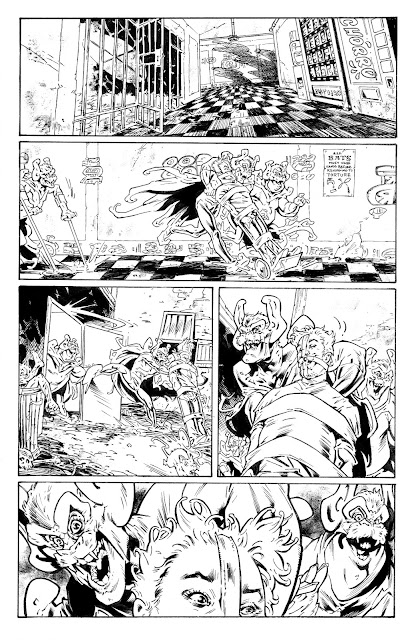 The rust has begun to shake off.  Getting the first page done exorcised a lot of the bad spirits.  Confidence and routine are a huge part of doodling.  The layouts for the second page came much easier and I only drew it once.  Other than forgetting to draw one of the characters into the scene, there were few bumps in the road. 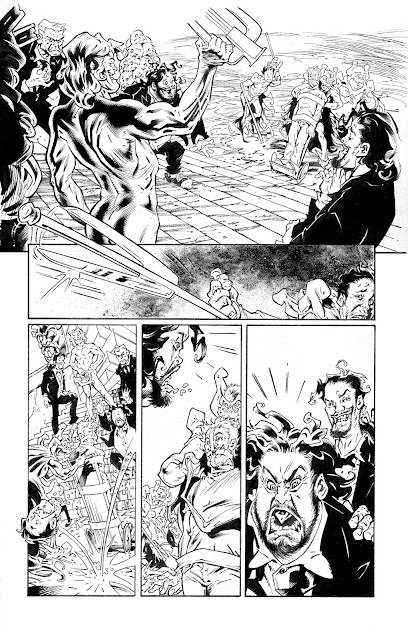 I'm sure it's all easy-peasy from here on out.